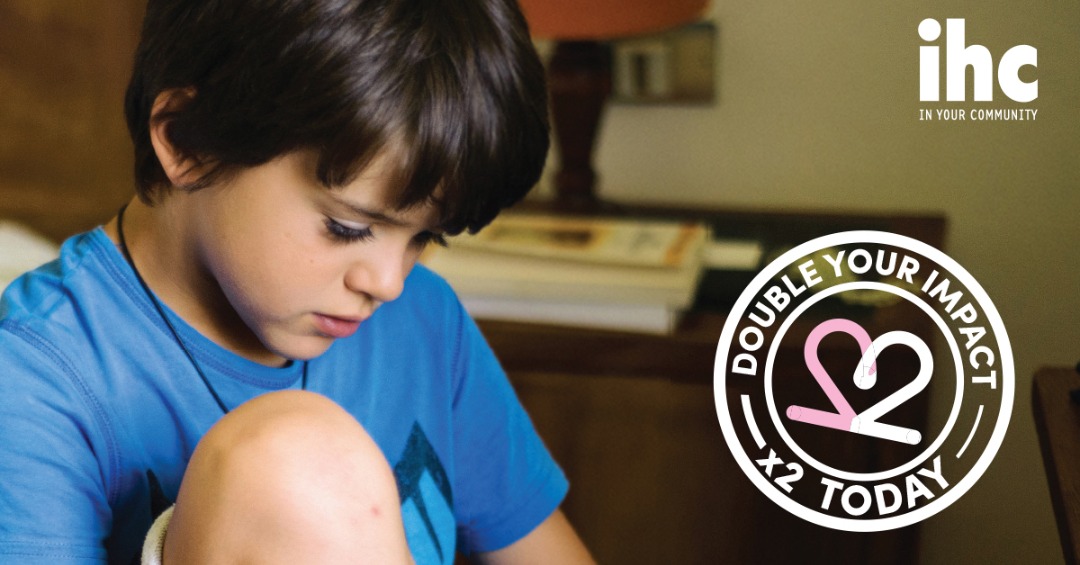 Sam’s* a real fighter. He was born ten weeks prematurely, fighting for air, fighting for his little life. It didn’t stop when he came home from hospital either, as his Nanna (Fran) remembers well…

“He was in and out of hospital so many times. One time they had to pull the ambulance over three times on the way to hospital to resuscitate him. I watched him stop breathing three times. Three times they brought him back. It was like he wasn’t meant to survive. But he’s a fighter.”

Sam’s still fighting. Not for survival, but for a chance to have a better future.

He has a hard-to-recognise intellectual disability that went completely undiagnosed until he was 8 years-old.

There was something wrong, but no one knew what. At kindy he didn’t learn like the other kids, but nothing obvious stood out. On his first day in school, they asked his mum, Andrea, if Sam had Autism, or ADHD. She said…

“No. According to his paediatrician, he’s fine.”

You see, Andrea had taken him to see a paediatrician several times, explaining what was happening. But Sam always behaved himself during these sessions, so the paediatrician thought he was fine. Sam’s school had him assessed by an educational psychologist too. But the psychologists also thought Sam was fine.

In despair, Sam’s school applied for funding for a Teacher’s Aid. Twice. But twice the department of education turned them down. Why? Because Sam didn’t have a diagnosed intellectual disability.

Sam was stuck in a horrible situation. He needed help for an undiagnosed disability. But without a diagnosis, no one would give it. He was desperate to learn, to catch up with his classmates. But he couldn’t no matter how hard he tried.

Can you imagine how terrible he must have felt, how his sense of frustration must have built and built. It would be the same for any of us in a similar situation.

One day, after failing yet again, and being teased for it by his classmates, Sam’s isolation and frustration boiled over in a destructive outburst in the principal’s office. His Mum Andrea and Nanna Fran felt completely lost…

“We were at our wits end. We didn’t know where to turn. I thought, ‘we can’t go on like this, there must be someone out there who can help.’ That’s when Jim walked through the door.”

Jim is one of IHC’s first Family Whānau Community Liaisons. He’s the kind of person you can help IHC provide for a family like Sam’s.

Jim recalls the moment he first heard about Sam…

“I didn’t even know if Sam had an intellectual disability at that stage, or if I could help, but I met with the family the next day. The more they told me, the more I realised there was something going on that had been missed.”

Jim quickly got on the case, speaking to local organisations he knew could help. This resulted in a diagnosis that explained everything. It turned out Sam had an IQ of just 55. Much lower than the average 90 to 110 , which his classmates would have had.

That’s why Sam was struggling to learn. That is why he was so frustrated, why he felt so far out of his depth. When all he needed was someone like Jim to join the dots and get him the help he needed.

As you can imagine, no one appreciates Jim more than Sam’s mum…

“Jim is an angel. He changed our lives. I don’t know how we could have coped if it wasn’t for him. And I hate to think how life would be for Sam without the education support he now receives, thanks to Jim and IHC.”

Sam is now going to a school where he gets the kind of support and education he both needs and deserves. He’s learning really well and is no longer frustrated all the time. He’s a happy kid doing well in school.

Jim is one of four IHC’s pilot Whānau Liaisons. Sam and his family are just one story amongst many, of the impact this IHC programme is having and supporters like you can have.

Ordinary families are not experts in intellectual disability or how to navigate their way through the public health system. There are gaps and as a result, families like Sam’s fall through them all the time.

IHC needs to double the numbers of Whānau Liaisons so that we can reach more communities around the country. We can’t do that without the love and kindness of wonderful supporters like you.

Please will you do this amazing thing

Every dollar you give will be doubled in value by an extremely generous Gift Matching Circle of donors, so $30 becomes $60, $100 becomes $200.

* To protect identities, names have been changed